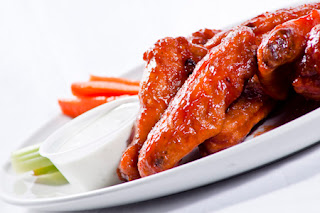 I remember when I first starting taking an interest in photography, in microstock to be specific. I became very interested in getting photos of a given object, over white. An 'isolation' as most call it.

They certainly require some gear, some extra space, and a little thought. I decided to give a brief rundown of how I do this when I was thinking of what I could possibly write about for my blog. So the other day I shot some food at a restaurant for their new menu launch. Their only direction was that they would like to see their products on white.


So how did I go about doing this? Well here is how the shoot went; 1pm - arrive at restaurant. Had a chat with the lady who contacted me, and immediately started looking around the restaurant to see where would be the best place for me to set up. It was closed for lunch so I had free reign on my location. 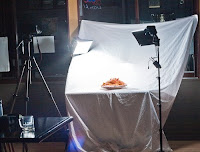 I found a wall near the entrance which already had some small hooks in it - perfect for hanging the queen size (but a smaller one would have done for this job) bed sheet that I use as a white background. Draped over a table, I sat a large silver reflector on the table also(they were black, and black eats light). The food would eventually sit overtop the reflector.

Background and reflectors ready - now what to do with the lights?
I stuck one behind the bedsheet and pointed straight down at the reflector. This filled the area behind the sheet with light, which shines through and makes our sheet white, and brighter than any shadows that may have fallen on it.

Then i had my combination of lights in front of the sheet - that you can see in the setup shot. the rear one was my key light, making that brighter, rim-light almost on the burger bun above.. And on the right was my fill flash, kept on a lower power than the key light, just to keep the burger facing the lens from dropping into shadowy abyss..

So this worked out relatively well, but I still have a little shadow on the white around the bottoms of the plate... I want to fix this for next time, so I have bought a relatively large piece of Lexan (fiberglass). I plan to raise it about 2 inches above where i have my reflector sitting on the table. Maybe with a stack of plates in a restaurant, or two small lengths of wood - whatever is available! This will leave a little more room for light to bounce around off the reflector and light up underneath the plate (which is being supported by the lexan now).