And now for something completely different,

on May 23, 2010
So this post is completely different than the regular photo stuff I usually write about, but because its titled "C Gardiner Photos & Art" - what I am about to share with you does fall into art from my point of view.
I will start by saying I made a super hot friend since I have moved to Kelowna.  This is how it has changed my life.

Are you curious yet? Read on!


Changed my life? Ok maybe that is exaggerating a bit. Since I have started my job at a brand new restaurant in Kelowna, I have been able to use a very cool piece of equipment, a Montague C45S, a beast among grills, although more specifically it is a broiler.  This is the 'friend' I was talking about, although not 'sentient' or human, I do spend a lot of time with it, rely on it, and work with it, to the point where I can call it my friend. 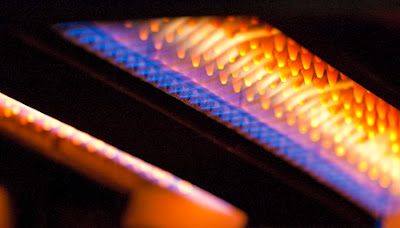 I'll run it down for you; the burners in the pictures heat ceramic radiants (the little cones) to extremely hot temperatures.  Above the radiants you see, there is a sear top, like a flat top a breakfast restaurant would use with eggs, but a good 3x hotter (5-700 degrees).

Below the burners is the grill racks, they look like any regular grill except the heat comes from the top. It differs from a regular bottom heating, open grill (like most restaurants have) because a) the grilling rack slides out to add and remove steaks and b) its around 1800 degrees below those little cones. At least twice as hot as some of hottest bottom heating open grills.

Why is this broiler so awesome? Well going to a conventional grill would feel like driving on the autobahn to hitting gridlock traffic.  As a demonstration one day, I would like to challenge someone armed with a microwave to cook a steak faster than me, armed with my broiler.  As close as that race may be, there certainly would be no contest on which one will taste better.

Is it all good? Well... no not really. It's something I probably shouldn't have to mention, but it definitely gets very hot in the area I work in.  I have seen temperatures of around 120F on the meat thermometer on my arm. Thats about the temperature of a mid-rare steak. Why am I not cooking like a 7oz Sirloin? Not sure, but it probably has something to do with the 3L Camelbak I keep on ice, at my station.  It will easily be empty after the 3 hours of 6-9pm.

Why did I write about the broiler? Well its something I use a heck of a lot these days (more than my camera sometimes) and I really loves the way it cooks a steak.  If there is a steakhouse in your area that uses a Montague - definitely try it out.  As far as I know, Chop has the only one in Kelowna.
broiler cooking grill montague steakhouse